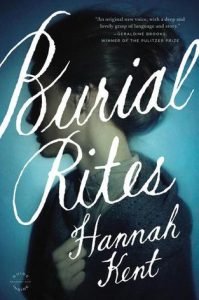 A novel based on a true story of Agnes who was the last person to be executed in Iceland.  Agnes was one of three people convicted of murdering two men and setting fire to the farmhouse where the murder was committed in the early 1800’s.

The story transports one to a close-knit farming community in northern Iceland.  It told of the harsh climate, of difficulties farming and illustrated the life of abandoned children, servitude, and superstition.  The mythology of the accused character, Agnes, is that of a cold heartless murderess but the picture painted by the author is of an intelligent, hardworking lonely girl not treated well by life’s circumstances.

The two characters that stand out well are the main character Agnes, and her “spiritual advisor” the young Minister Toti.  The technique of telling the story and then giving the version of the character of the event added to the humanity of the people.  The role of Margret – the mother on the farm where Agnes was held – was particularly poignant.  Margret was kind and empathetic to Agnes and probably facing death herself from a serious respiratory disease.

The book had an eerie quality and was disturbing and depressing.  A background search about the author, Hannah Kent, showed the reason why a young Australian author would choose such a topic in a faraway land.  As a Rotary exchange student in 2002, Hannah wanted to live in a cold country where she could experience snow – a contrast from her home city of Adelaide.  She was sent to a small community in northern Iceland and found herself lonely, isolated, and homesick.  During this time, the author was told the story of Agnes, which had a huge impact and began the journey of finding out all she could about the life of Agnes, the murders, and the circumstances in which they occurred.  This then became the thesis for the author’s creative writing course.

The style of the writing and the development of the characters is good (8/10), but the story line was disturbing.

We did this book in May of 2015 and I can’t bring much more to the table than read the crit I did back then, which was: Hannah Kent is certainly an impressive wordsmith. In this work she demonstrated a wonderful ability to touch the five senses of the reader, invoking strong images, sensations and feelings. Example: the death of Inga (pages 144 – 157 end of Chapter 6).

The book as a whole is a litany of extreme discomfort and misery, all brought to such tactile and you-are-right-there-in-the-scene life by Hannah’s writing. It was so descriptive of time and place, people and emotions. At certain points I felt it was too much to put myself through and wanted to stop reading but couldn’t. I felt guilty to be lying in my snug bed on the Sunshine Coast. The sexual content, Pages 220-221, was very well done. And the character growth was expertly handled – Margret and others coming to love Agnes.

Yes, this book was well written but man, oh man, it was dark. So after all the darkness, gloom, damp; doom, misery, discomfort, nasty evil people, and downright bastardry I was hoping for some sunshine, a happy ending. But Hannah afforded the reader no such light relief. And the ending, the execution scene (Pages 325-328), was so well written.

Probably some of the best writing I have ever seen. Hannah brought home the bone chilling fear, and Agnes’s plea: “Toti, I don’t think I’m ready. Can you make them wait?” was so human – it touched my heart. This book dug its way into my head but with so much deep darkness I came away with an almost irresistible urge to run into the lounge and put on a “Mary Poppins” DVD.

I will certainly be seeking out more of Hannah Kent’s work and I desperately hope she is not a “one book” wonder.

PS: I read “The Good People” in November of 2016 and only gave it a 6. It was not as good as “Burial Rites” with little character development. I have bought her latest, “Devotion” on Kindle but have yet to read it.