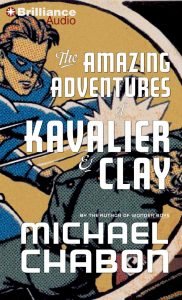 Amazing Adventures of Kavalier and Clay is personal story of a young man sent by his parents from war torn Europe for a better future in the USA.  Joe joined his cousin in New York, and the story traces the lives of two talented young artist/writers in WW2 America in the
backdrop of the world of comics and their superheros.

At a time of great threat and disturbance, the comic world influenced people and the business culture.  A heartfelt letter from Joe’s mother, still in waring Europe, is particularly poignant.  The two main characters (Joe and Sam) came alive and were very likeable.

This long book takes time and effort to plough through – coming together only after 300 pages.  The writing was unnecessarily longwinded.  Unusual words became so numerous they would distract from the storyline for many readers.