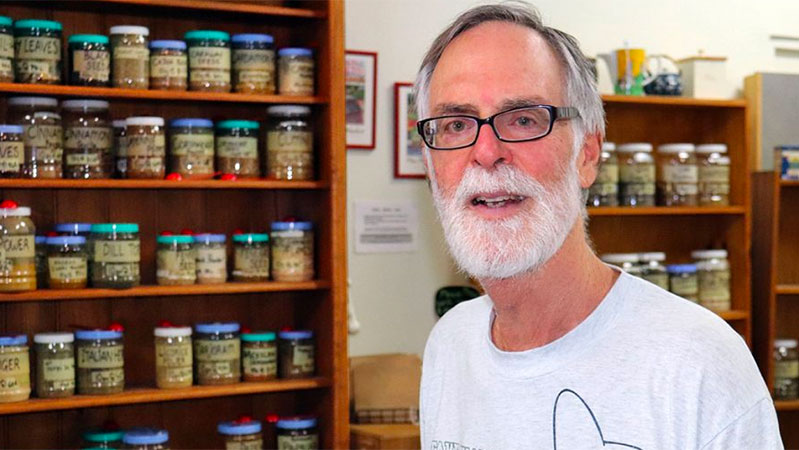 “Now that we are here, where do we want to go?”

John D Cooper has served U3A Sunshine Coast since the very beginning when he was one of the four course convenors at Tea, Talk and Tutors when more than forty 3rd Agers at Moffatt Beach joined U3A Sunshine Coast’s first mini-courses. John’s story is one of emigration, discovery and enterprise in community work, with U3A at its centre.

“I came to Melbourne as 29 year old newly hatched Rabbi with an interest in service for the international Jewish community. I had also completed studies in psychology and gerontology – the psychology of ageing well – so I was involved in ageing networks from the first moment I arrived in Australia. The very first week in Australia, I participated in an Australian Association of Gerontology conference in Sydney. I intended staying for three years, and here we are now 42 years later.”

With an academic background in adult education, psychology and gerontology it was preordained that John would have a significant career in ageing networks that are the cornerstone of U3A.

“I’ve always been fascinated by the issue of ageing well, and I had a really good model, with my mother, Frayda,” John said. “What allowed my mother to age well was that she just kept reinventing herself. First of all, she was a widow at age 40, my father having died of Hodgkin’s Disease, she was an innovative teacher with mathematics as her specialty, she taught literacy and numeracy at all levels, then became a writer and editor of textbooks.

As it turned out, John did not pursue a religious profession. “Truth be told, I didn’t see myself as a congregational Rabbi but rather to be involved in community service,” he said.

When Frayda joined John in Melbourne in 1979, they soon after began their excursions north. “In those days my colleagues and friends regarded Queensland as foreign territory; they made explorations overseas or occasional trips to Sydney but they didn’t know their way into the ‘wilds’ of Queensland. However, we set off in our little Honda Civic and kept driving north until we reached Yeppoon.

“On the way back to Melbourne we stopped over near Noosa, and there was something about the Sunshine Coast that appealed to us. Standing on the highest spot of land in Caloundra was an amazing feeling. It took a while to sink in, but after a couple of subsequent trips to Queensland, my mother finally said, “you know what, I could live here’. So, she bought a place in Westaway Towers in Caloundra, and that was 1985.

Frayda was part of the very beginnings of U3A in Melbourne. “Even in those early days my mother had a keen interest in ageing, and with her sociology and teaching background decided to do something that would provide services to independent older Australians,” John said. “She was interested in the Third Agers before we even had that in our vocabulary. This included all the positive, vibrant and vital things that The Third Age could be about, not just retreating to the golf course or the pub, or the Bingo hall.

“Pre-U3A, I thought of communities in terms of ‘silos’ of interests. Over here were the card players, over there the sporting types, those wanting further education, and whatever else. My mother, Frayda, brought all these disparate groups together before U3A began in Australia; so, when U3A came along it became the banner for what my mother was enacting already.

“On the downside, when we relocated to the Sunshine Coast, she said ‘I’ve come to a desert’. It may be an oasis in many ways but in terms of lifelong learning there were only a few diversionary TAFE hobby courses. It wasn’t U3A as we know it: mutual-aid, self-help lifelong learning.”

The genesis of U3A was essentially a meeting of minds. Frayda discovered that many of the talented people who were teaching and convening didn’t necessarily have formal qualifications, particularly women. Her generation, and some in my generation, didn’t often get a fair go at tertiary studies,” John said. “With U3A, this was their opportunity for ongoing learning.

“We identified people in the newspaper and elsewhere who seemed to be interesting people and we target recruited them into U3A. We recruited people with enthusiasm and the will to pass on their knowledge to others. There was scepticism but my mother said ‘it’s worked in Melbourne, we’re going to it, I’m going to do it’. We didn’t spend money on advertising, we used Letters to the Editor and sent in stories to the Sunshine Coast Daily newspaper to get the word out. We worked the system and lo and behold we started having these big meetings, and we were away.”

The Sunshine Coast was fertile ground for U3A, with a high retirement demographic and a high percentage of people who didn’t have the opportunity for tertiary study. They wanted to learn. “Oh, they hungered for it, especially women who never had a chance to study science, the humanities, etc,” John said. “It took off like wildfire.”

“One interesting aspect at present is the increasingly multigenerational profile of U3A membership. We are alive and living longer, and there are now a couple of generations of Third Agers. Some of us are more gregarious, others less so, and we need to bring together open-minded people in a comfortable social and learning atmosphere. There needs to be inclusiveness in our welcome to these new members.

“While the past may be important historically, in some ways the past is beside the point, which should be ‘what is your interest now’? Perhaps we should also be asking ‘how did we get here?’ and then ask, ‘now that we are here, where do we want to go’? I liken this premise to our GPS navigation system. When we go down an apparently wrong path, it just says ‘recalculating’. So, is there a way we can get to where we want to be from where we are right now?”

“I think U3A should always be a place of active exchange of ideas and knowledge, with people not just attending lectures passively but becoming involved. The U3A way is to ask a question, not out of academic interest but out of lived experience, out of our ‘seat of the pants’ curiosity.

U3A has had some highly qualified people as tutors, such as ‘Bunny’ Austin who was a full professor from Cambridge University. His students loved his classes and he passed on great knowledge during his time at U3A.

“Bunny came off the beach to attend one of our large meetings at Caloundra, and was in his board shorts,” John said. “The next time he showed up he was wearing a tie, and we said to him, “no, no Bunny, that’s not on, we don’t wear ties here’. We’ve had all these wonderful people in U3A and we honour them, but they just wanted to pass on their knowledge and life experiences, and be ‘down to earth’ about it.

Insofar as the future of U3A is concerned, John Cooper is less interested in past achievements than in the future of the organisation. He advocates having younger people with “new energy” coming through, and working through how U3A can expand without it becoming bureaucratic in its delivery of services.

“Right now we have an amazing opportunity with the Baby Boomer generation now of age. If U3A is seen as only for people in the late seventies and eighties, then it will need to attract more people in their sixties, who are quite a different bunch.

“We also need to enhance, augment and discover not only with technology but also in the person to person context. “We have unlimited access to the Internet, through webinars and online groups but there’s another dimension you don’t quite get online, and that’s the personal contact with people ‘on the ground’ within your own gambit. I just love going to gatherings and finding out where people are from, their life story is and the different life experiences to my own.”

The linkage with the University of the Sunshine Coast is regarded highly. “They embrace us because we are community minded and we are a gateway to courses undertaken by our members. This brings another dimension to tertiary education and not only that, if grandparents keep learning, it wakes up their grandchildren who say, ‘hey, grandma’s doing this, why can’t we stay the course’?

John was not only directly involved in the close alliance of U3A and USC but also in the initial conceptual planning and argument for a university on the Sunshine Coast. “My mother was involved in the very beginning with a group, going back to Sir Zelman Cowen and Lady Anna Cowen’s time, when they created in Queensland a branch of the Australian Association of the University of Women. We looked at the Gold Coast and they had Bond University and a branch of Griffith University later, and we only had a TAFE. The Sunshine Coast was being left out.

“We made representations for a university with the then Minister of Education, Brian Littleproud. We were very actively involved in all the discussions, including establishing an office for U3A on the campus, despite the naysayers’ doubts about getting a university here.

“There was surprise at how much interest there was from mature-age students and how much hunger there was for learning amongst Third Agers. So, we built a bridge that wasn’t just an office; it was a synergy manifest in lifelong learning and we, as U3A, are the exemplars of that.

John says the essence of U3A boils down to ‘use it or lose it’, not just the physical, all domains: continue to use and engage the educational, social and community channels, and enable people of all persuasions and health levels to participate. When we embrace the wonder of discovery with like-minded and interesting people of all ages, the Third Age may become the best chapter in your lives.”