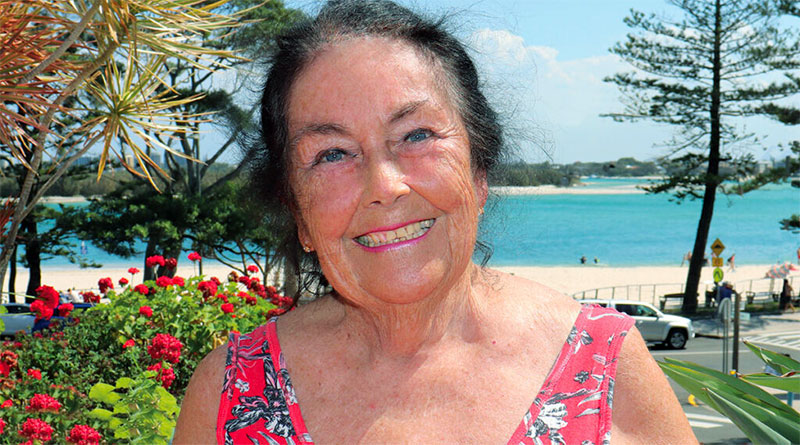 One of our newest Life Members, Patricia Barry, has combined a love of language with a lifelong contribution to the lifesaving movement – and she has been recognised for her community work with a nomination last year as Senior Citizen of the Year.

Since arriving in Australia from England in 1981 with her husband Tony, Patricia has been involved in community service. Working in Brisbane initially, the Barrys continued their involvement in lifesaving – and 40 years later they are still patrolling on Bulcock Beach, Caloundra.

Surprisingly, Patricia confesses to be an aqua phobic person. “I only learned to swim with the encouragement of my husband,” Patricia said. “When my kids were learning to swim I joined in, as I was determined that they would not be like me, avoiding the water.”

Patricia’s other pursuit in life has been teaching the French language. “I have always spoken French from a young age, having been schooled at a convent in England run by French nuns who were excellent teachers. I also had a pen friend in France and had my first trip to France when I was just thirteen, travelling on my own. Times were different back then.”

Patricia taught a range of subjects in Brisbane at Primary and Secondary school level for many years and then became involved in U3A in 2008 after moving to the Sunshine Coast.

“A friend of mine suggested I join U3A, so I investigated and found there was an advanced course run a Belgian gentleman, Guy Spilers who later suggested I become a tutor in French, which I did. I still teach courses at the beginner and advanced level, which was nice for me as I was really missing teaching.

“People say to me: ?oh, older people don?t learn as quickly, which I think is rubbish. It?s an urban myth, as our pursuit of learning is the same as for younger people and everyone learns at their own pace. I see people in U3A grow in confidence as they pursue new things.

“Key to learning a language, for example, is getting people to work together. We do a lot of small group and partner work within the class, we do a lot of role play, and for some people that really brings them out. We may role-play meeting someone for the first time, having to ask questions about them in their language, so people have to act a bit, which is close to real life situations.”

Four classes, with about 90 participants, continue to be successful, from beginner level right through to fluent level. “Firstly, I had a class of beginners and they said ?can we go on, so we progressed to higher levels. Some people in the class have been there for nine or ten years. I think it?s the conversation and the comradeship as well that keeps people coming back ? and the friendship that forms within the group.

“Some people really wanted to visit France but never had anyone to travel with, so they organised small groups to go to France on holiday, which they really enjoyed.”

Patricia’s nomination for Senior Citizen of the Year recognised her community work in training lifesavers in resuscitation, how to use a defibrillator, first aid and safety in the water aspects. “We also go out to not-for-profit groups, such as U3A groups for example, and run courses for them free of charge,” Patricia said.

Patricia holds U3A in high regard as an organisation supporting older Australians. “I think U3A is a brilliant organisation as there is a huge range of activities that people can enjoy, especially if you come up to the Coast and you may be lonely, a ‘newbie’. You can join U3A and do something interesting, find people who are like-minded and make friends for life. To me, that is the strength of U3A, and you can keep yourself active, learn new things and generally enjoy the later stage of life.”

Like a lot of their contemporaries, Patricia and Tony travelled extensively before the Covid pandemic hit. “We belonged to Friendship Force and that was good because we hosted people here and in turn were hosted by people overseas. Ee had some wonderful experiences such as a great holiday in Peru and we went to Ghana, Azerbaijan and Georgia – really interesting places staying with lovely families, which made a real difference.”

Patricia was pleasantly surprised to be nominated for Life Membership with U3A, saying “it was lovely that they thought so highly of me to do that.”

The expansion of U3A on the Sunshine Coast seems inevitable and Patricia is a strong advocate for a place to call home. “I know they were looking for a place here in Caloundra, as this end of the Coast is going to be a growth area for membership,” Patricia said.

Zoom classes online have become the norm for the French classes. “I think our members have adapted really well, as a lot of them aren?t technically minded or internet experienced,” Patricia said. “However, I do have a website where I post the lessons online so they can download the lessons and see what people did and catch up.”

Patricia is happy to continue on with U3A French language courses and the demand is certainly there, with a huge demand pre-Covid 19 particularly for beginners. “We could do with more tutors as there aren?t enough at present,” she said.

“I’ve really enjoyed the time I’ve had with U3A, as it gives me a lot of pleasure out of teaching, meeting other people, seeing them realise their quest to learn the French language, and I’ve made a lot of friends along the way.”