When U3A member Margaret Backhouse made her decision to paint a portrait of the famous guitarist, Jimi Hendrix, she knew it would be a challenge, as the image of the world famous musician was well known to millions of fans worldwide.

Undaunted, Margaret took to the task assigned in her art class by renowned local artist, Clive Holden, who asked his class members to paint or draw portraits on a musical theme.

“I joined Clive’s class last September to learn from Clive who is a master painter but who also has the ability to teach beginners to achieve amazing things,” Margaret said.

Margaret decided on Jimi Hendrix because her husband Mike has always been a big fan having  seen the guitar genius in Baltimore in 1970. “So, I decided to paint this portrait for Mike, for his birthday, which also fitted nicely with the musical theme for the artwork task,” she said.

Margaret certainly gave herself a difficult task; she hadn’t painted a portrait before, it was her first time using oil on canvas, and she had to satisfy a demanding customer, her husband.

“I chose one of the hardest things I have ever done in my life, and it took hours and hours, but I’m really happy with the result because it has perspective and I’m happy with the guitar rendition,” Margaret said.

“Finally, after I worked on it and worked on it, my husband was actually happy to have it as his birthday present.”

Margaret’s portrait along with the artwork created by her classmates were presented at a showing and musical afternoon at the Coolum Community Centre recently, with many of the works sold prior to the day, which was very satisfying for the artists.

For her next art project, Margaret intends to paint the rock formations on the Berkeley River in the Kimberleys. “I went there a few years back and took photos of the magnificent rock formations and luminous green water of the river, and I have a vision of the rocks in red contrasting the river so green, and I want to capture that as my next art project. Having finished my first portrait, I don’t think I will tackle that again,” Margaret quipped.

Above: Margaret Backhouse with her portrait of Jimi Hendrix. 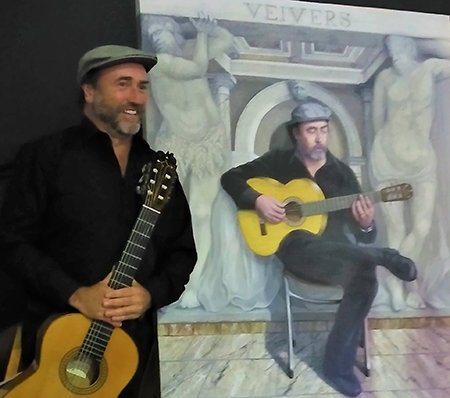